Church today was really awesome. I actually brought 8 people to church today, 6 of whom are newbies to Church. Some are not christians, but there's nothing wrong with bringing them to church. Who knows what could happen?

Then we had a time of prayer. I raised my hands to the Lord and just worshipped him with prayer. Someone came up behind me and started praying for me, and all of a sudden, I broke down. Right there and then, the tears just started spilling and I could really feel a cleansing of the spirit in me. Wow. The feeling was so great.

Then after prayer, we celebrated our Lord's mercy with praise and dance. It was crazy! We were all dancing and laughing and just praising the Lord God.

We then went for dinner with the UrbanLife at Universal Pizza, and got to check out Roy's new tricks. Roy is cool! Haha. Magicman. xD. Then we stopped by Freddo's for ice cream, before heading back.

And it's true what Jonathan said, "We did well today."


Oh mans. I have been super lazy lately with my blogging, plus since school has started, work is keeping me quite busy.

Saturday 1 March: Went to Luna Park with my housemates Deva, Joy and Tiffany. Not a fantastic place, but fun when you have a group of friends to giggle and fool around with. The highlight was this Lara Croft Maze, where it was really dark and spooky, and they had actors, dressed like wild cavemen-monster-creatures, suddenly jump out and scream at you. So then I asked myself, Why in the world did I volunteer to lead? 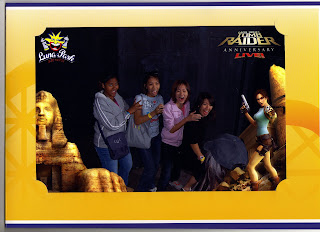 Yeah, I can hear you laughing at my face right about now. xD

Tuesday 4 March: Sharon invited Jonathan and I over for dinner. Haha. I love Sharon, she's really cool and her cooking rocks. She made steamed pomfret and sambal kang kong, and man, was I really digging into the sambal kang kong. The highlight of the night, which I unfortunately could not bear to eat because I was so full, was her homemade banana chocolate baileys ice-cream. =D
During the walk back and forth, I got the chance to have a nice chit chat with Jon; He's probably gonna read this, but I must say, I was a little surprised and quite glad with how much he opened up to me - I suppose after being here for weeks, he and I are quite close as friends, which is cool.

Wednesday 5 March: UrbanLife! Man, I always look forward to Urban Life nights. This week, Jonathan, Elisa, Zelia, Melissa, Vera and I walked together to Milano. Tonight's bible study was about the Evils of the Tongue, and how words can really kill a person, literally and metaphorically. Worship was really powerful and I could feel God's presence in the room right there, speaking to each one of us. After that we had an altar call; God bless all those who were brave and went for prayer. =D
After urbanlife, we all sat outside in the open air for supper, before Scott gave us palmerston peeps a ride home. Scott rocks x)

Thursday 6 March: Tiffany, Lydia and I tried out the BodyCombat class at Melbourne University Sports Hall. It was really a lot of fun, and really tiring. The music was super fast, and the every routine lasted for one full song, plus we had stretching and abdominals after class. Ouch. But man, after chugging down a lot of water, we felt really rejuvenated - Lydia was tempted to run one round around the track! We were thinking of trying the other classes; at least we get to shave off some of the piggy pounds we may put on here xD.
At night, most of the palmerston peeps gathered to give Desmond a birthday surprise. Well, not much of surprise, we suck at hiding. Anyway, we waited for him to come down, hiding outside the house in the dark. Then we all stood up and entered the house singing Happy Birthday To You. The best part was the present we had for him: The guys gave him a plate full of cream and said, "You can smash this into ANYONE'S face, and almost immediately the cream went straight for the expected target's face. Tiffany and I were laughing real hard. Also, to the guys, what is a birthday bash without a good bash? At least 7 of them ended up wrestling Desmond to the ground!

Saturday 8 March: After enjoying a very lazy saturday morning and afternoon, Tiffany, Deva, Joy, Lydia and I got ready in the evening to go see the Moomba Festival.
We made a quick dinner stop over at Singapore Chom Chom and ordered Fried Rice with Chicken and Salted Fish, Singaproe Prawn Noodles and Claypot Rice, which were all really nice, except the claypot rice was very authentic. Ah well, it was still value for money.
After that, we spent the night at Moomba Festival down at Yarra Bank. We played this random game where you catch plastic crocodiles, and you get a prize depending on the sum of the numbers written in the mouth of the crocodiles. Lydia won this cute green shiny fish that we call "Tiffany", don't ask why xD.
We tried to play this BlackJack game, only to find out after spending $8 that it was pretty much rigged. GRRRR.
Oh the fun part was this ride we went on that was really crazy! Spinning in the air at fast speeds, and going round and round - I was so dizzy when I got off, but it was really a lot of fun. =D
The highlight - the fireworks. They were so pretty.